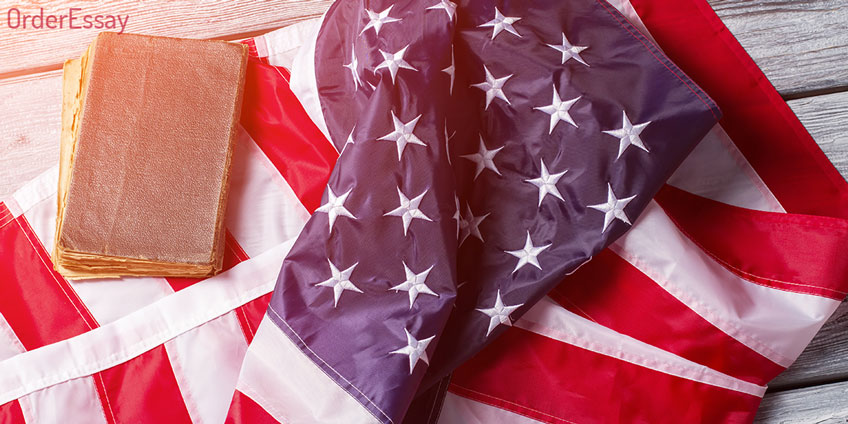 Writing a book review requires your utmost engagement and concentration. It is not enough to be aware of the plot or the main characters’ development. Basically, it is not enough to just read the book, as in order to write a proficient review, you need to have a great deal of background knowledge.

When reading, I recommend you also learning how to take notes in the best possible way, so that you can find the necessary information easier. It just happens so that if some thought bumps into your head, it is better you write it down immediately, as there is a high likelihood you will forget it later.

American Gods, published in 2001, is a fantasy/Americana/mystery novel by a British author Neil Gaiman which centers around the story of the ex-convict Shadows Moon who just gets released from prison and is about to have his life and mind-set changed forever.

What Angle to Choose?

This book is so profound in themes that it is easy to get carried away and produce an incoherent and disorganized review. Structure is crucial as it ensures your reader gets the message you are trying to convey and is not confused. Therefore, I suggest you first of all single out the main themes you want to discuss and allocate paragraphs to each of them.

The main themes of American gods are the melting pot, individualism, belief, adaptability, sacrifice, the truth and the land. You do not have to talk about all of them, although your teacher would appreciate you mentioning something about them all.

Make sure you single them out distinctly and do not talk about two themes in one paragraph. Be very careful not to deliver a hodgepodge of unrelated thoughts and ideas.

America is a country without a formed distinct identity – this is what Neil Gaiman believes. There is no one united nation, but rather a bunch of cultures and nationalities that intermingle and create a strange harmony and agreement.

It is not just the immigrants that transform the country all the time. It is also a desire for change spurred by the interminable penchant for innovation and improvement. People derive passion from their heritage for the sake of creating something new, something that would challenge the old ways.

There is no single religion, and Gaiman shows in American gods how different myths, old and new gods co-exist thanks to people’s remarkable ability to reconcile conflicting ideas. This is because America is so diverse that it allows for many differing thoughts to nest into people’s heads.

The book shows that because everybody is so distinct, and there is no single right way of living life, people are freer to make their own choices. Neil Gaiman further stresses the importance of individualism by saying that Americans need individual stories and not just numbers.

The book mentions cultural heroes such as Paul Bunyan in relation to the idea that a human can be like god if they commit the right deeds. Shadow Moon becomes a semi-god when he makes the sacrifice in the end for the sake of his friend, Odin.

Shadow does not lean to gods, but instead treats them as equal. He is not afraid to criticize them and go against their will. It shows an individual that is not controlled by the divine, but is capable of making his own choices.

The oldies understand that they are losing their popularity and influence over the minds as the world progresses. The old gods such as Odin, Czernobog, Loki cannot compete with the ever-growing admiration for the newly minted gods such as Media or the Technical Boy.

They even want to go to war with each other. However, the problem is that it is not a war they can win. It is people who decide whether they live or die. Gods exist only so long as people keep believing in them.

The old gods had to adapt in order to survive in the ever-changing surroundings. This triggers fear and irrational behavior as in this fight for survival only the fittest and most pliable are to persist.

For instance, Czernobog goes to work in the meat factory where he gets to receive regular sacrifices by smashing animals’ with the hammer. Bilquis, the goddess of love, pretends to be a prostitute to lure men into her bed and then consume their energy.

These changes let old gods persevere despite the competition with the new ones. Adaptability is crucial in the modern era of changing lifestyles and technology. A person’s thinking shifts much more often than a couple centuries before, and if gods want to remain in their thoughts, they need to transform accordingly.

Gods, both old and new, demand sacrifices. It is their way to ensure that they are going to remain alive. They extort people’s time and money, often leaving nothing in return.

When Shadow starts to serve Odin, he is not hesitant about risking his life. He agrees to play checkers with Czernobog to get him to join in the fight against the new gods betting his life on the win. He engages in bar brawls and even goes back to criminal activities having no qualms about the consequences.

However, these sacrifices are not championed by Neil Gaiman. The author advocates for a meaningful sacrifice – a kind where you really lose something when committing it. When Shadow makes the ultimate sacrifice at the end of the book, it is outlined as different from all his previous actions, as Shadow actually just started to enjoy his life and had something to lose.

The old gods lie to survive and to benefit themselves. They make people think they are adhering to traditions, when in reality they are just trapped by the outdated paradigms. Even gods are fooled by other gods. There is no escape from lies.

The new gods promise fame and prosperity, forgetting to mention that it may not necessarily lead to happiness. In the end, Shadow chooses the path of hard truths. It lets him break out of his lethargic, indifferent shell and see the meaning in life.

The author underlines the significance of American land, affirming that it is, in fact, the only god people need. Without land there would be no world, no existence, and no belief.

The cultural hero of the book Whiskey Jack states this idea when talking about the uselessness of gods and their wars. He talks about Native Americans who did not need churches or religion, because land was their sacred place.

Land provides people with resources necessary for their subsistence. Gods take energy and life away from people, while land allows them to live and prosper.

This is not just a fun book with gods and crazy events. It is a deep philosophical treatise on the state of modern belief and culture in American society. In order to decode those meanings, however, you need to see what’s behind the face value.

Hopefully, if you have not read the book yet, these themes will help you focus on events and characters that will add depth to your review. At the end you need to voice your opinion about the book. Make sure to find enough evidence to underpin your view, avoid subjective judgments and be appreciate, not only critical.